CA chair stresses on unity among the parties

Chairman of the Constituent Assembly Subas Nembang has underlined the need for all the parties to move forward for the completion of the peace process and constitution writing. Speaking at the concluding session of the two-day First Convention on Right to Information organised by Freedom Forum, Nepal here today, Nembang pointed out the need for shortening the transition in the country. He said the media should play a cooperative role in completion of the constitution writing and the peace process.The CA chair said that the attention of the Constituent Assembly (CA) was also drawn towards implementing the Right to Information (RTI) Act and expressed the commitment to making the right to information strong through the new constitution.

Stating the new constitution will be free press-friendly, he said the Legislature-Parliament was ready to amend the Acts and laws that clash with the RTI Act. He said the conclusions and the declaration adopted by the convention have initiated an important campaign for the implementation and translating into practice the RTI. 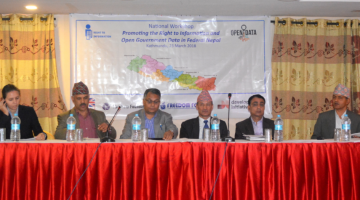