You are at Home Nepal’s Position in Budget Transparency

KATHMANDU, Nepal, December 24, 2010 – Nepal ranked number 46 in the world in transparency and accountability with its national budget, according to a biennial report released today.  An initiative of the International Budget Partnership, the Open Budget Survey 2010 is the only independent, comparative, regular measure of budget transparency and accountability around the world, produced by independent experts not beholden to national governments.

“Access to budget information is crucial to ensure democratic and accountable governance which is reflected in service delivery to public. It is the duty of the government to provide with its people the extensive information on budget in a comprehensive manner so that they can participate in budget making to monitoring process,” said Taranath Dahal, Chairperson of freedom1 Forum, which worked on the report.  “Enhancing access to information on budget documents requires government’s commitment complemented by the coordinated efforts of civil society organizations and non-state actors, which can pave the way for budget transparency and open governance in Nepal.”

Despite Nepal’s success, the Open Budget Survey 2010 found that 74 of the 94 countries assessed fail to meet basic standards of transparency and accountability with national budgets.  This opens the door to abuse and inappropriate and inefficient use of public money.

“Greater transparency enables better oversight, better access to credit, better policy choices, and better service delivery,” said Warren Krafchik, director of the International Budget Partnership.  Krafchik cited Nigeria as an example of how a lack of budget transparency allows corruption and mismanagement to go unchecked.  He noted Mexico as a case in which access to budget information ensured that poor farmers received subsidies intended for them that previously were diverted to wealthy farmers.

Based on documented evidence, the Open Budget Survey 2010 finds that just seven of 94 countries assessed release extensive budget information, and 40 countries release no meaningful budget information.  Without this information, it is difficult for the public and oversight institutions to hold government accountable or to have meaningful input into decisions about how to use public resources.  South Africa, New Zealand, the United Kingdom, France, Norway, Sweden, and the United States score in the top tier of transparency, while the worst performers include China, Saudi Arabia, Equatorial Guinea, Senegal, and newly democratic Iraq, which provide little to no information to their citizens.

“The good news is that all governments — no matter their income levels or political systems or dependence on aid — can improve transparency and accountability quickly and with very little additional cost or effort by publishing online all of the budget information they already produce and by inviting public participation in the budget process,” said Krafchik.  “In the long term, we would like to see the international community establish a set of global norms for budget transparency.  Such norms could codify broadly accepted principles and guidelines with respect to transparency and would provide civil society organizations, the media, and legislatures a powerful tool to leverage improvements within countries.”

The complete Open Budget Survey 2010, including detailed analysis, methodology, and recommendations, is posted at www.openbudgetindex.org.

freedom1 Forum is a non-political and non-governmental civil society organization working for the promotion of public accountability and transparency through policy research, advocacy and media mobilization. The Open Budget Survey-2010 for Nepal was carried out by freedom1 Forum.

About the International Budget Partnership 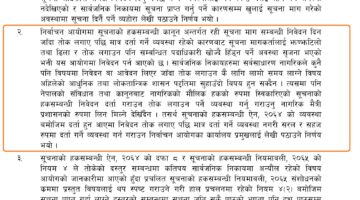 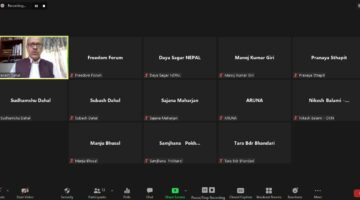