Freedom Forum organized a programme on ‘Human Rights on Internet/Cyberspace’ in Kathmandu on November 15, drawing the participation of 36 people from different sectors. Multifarious issues surfaced during the discussion. They were need of digital literacy, promotion and protection of FoE, and privacy, data protection, accountability of ISPS, urgent need of transparency on algorithm used by NTA to filter content, discriminatory digital space, non-participatory policy-making, multi-stakeholders approach to deal with internet issues, amendment of existing laws and policies, access to affordability of internet etc.

On the occasion, FF Chief Executive Taranath Dahal highlighted the objective of the program. He said the program was organized to foster debate on human rights on cyberspace in Nepal because the issues surrounding internet and cyber were emerging vehemently in recent time. The program would help provide input to the government to improve the present draft of national cyber security policy. The interface among IT community, rights defenders, government representatives, CSOs, academia and media, among others would function as an important platform to bring to light the pressing issues of internet, he added.

Similarly, human rights lawyer Santosh Sigdel viewed internet carries the values set by UDHR and ICCPR. As FoE is a frontier-less issue, it obviously covers the internet platform tool. The policy relating to internet must be human rights based, he stressed, adding making of policies relating to internet must be participatory. Citizen’s access to and affordability of internet should be major issues because they help ensure FoE online.

Advocate Tanka Aryal viewed human rights should be interpreted in a positive way.

Similarly, IT entrepreneur Bibhushan Bista pointed out the need of talking about net neutrality in Nepal too. Time has come to advocate for the rights to property on internet too. “I prefer to say internet facilitates human rights,” he observed. Discussion is necessary on what contents should the internet have.

Editor Rajan Kuikel viewed how State and people have used internet- positively or negatively should be studied well. Is internet for suppression of rights or promotion of FoE? Let’s discuss well, he added. 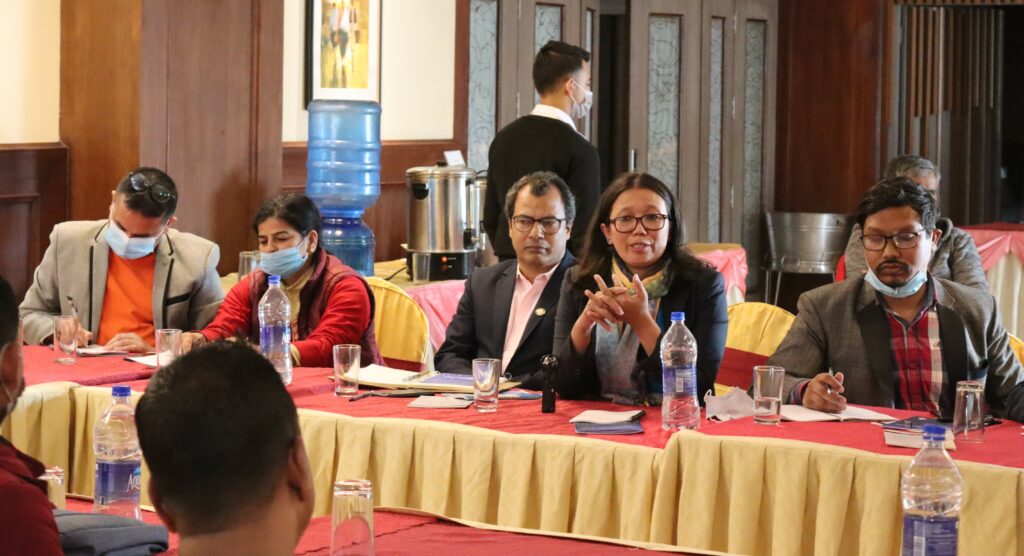 According to Assistant District Attorney Officer at Kathmandu, Shiluka Lingthep, most of the cyber crimes (95%) were perpetrated against women in Nepal. The most invoked law on cyber crime in Nepal is Electronic Transaction Act. She underscored the need of digital literacy and worried that ‘cyber crime’ is yet to be formally defined in Nepal. The concerned sectors need to launch and promote cyber literacy, she underscored.

Moreover, Joint Secretary at the Ministry of Communications and Information Technology Anil Dutt informed that the Ministry was receiving inputs on the draft of the national cyber security policy. So, the inputs from this program could help better it, he hoped. “Internet is a tool to which we can use it in any way we want. So, it’s positive sides should be explored for the benefit,” he added. Dutta also informed that IT Bill was pending at parliament for long. “We still have time to amend it,” he assured. 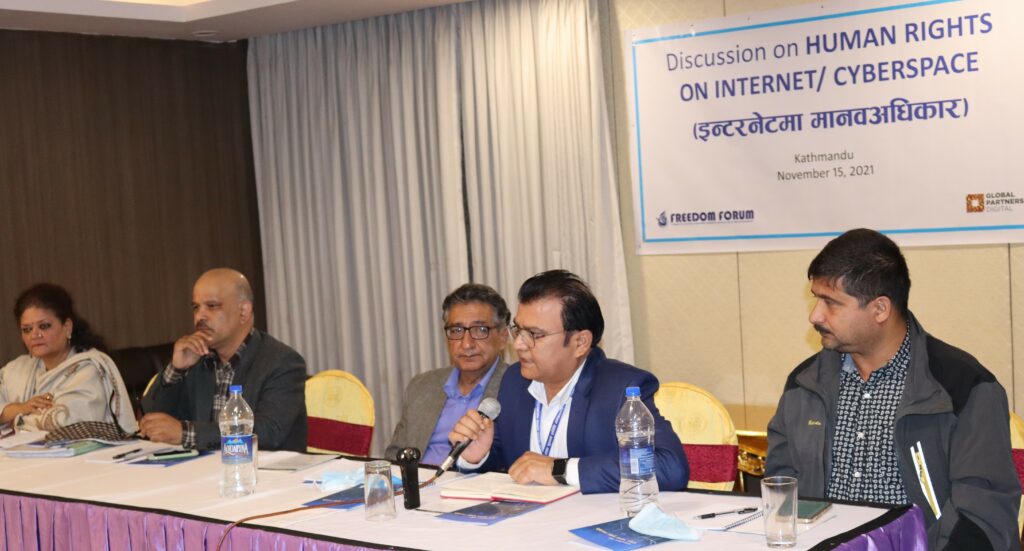 According to him, the Ministry had got numerous feedback on the draft of national cyber security policy. Data from as many as 101 government agencies were linked to central data base. There is Security Operating System , and 13-member CIRT, Dutta informed. There is a content filtering program at Nepal Telecommunication Authority (NTA). Government is planning to set up cyber security centre as well.

FF Executive Chief Dahal reiterated again and urged Ministry Joint Secretary that the policy-making process must be participatory. Only the government officials in the team to review policy and acts is not acceptable, he reminded.

Chief Executive Officer at Internet Service Providers’ Association of Nepal, Mr Suvash Khadka, informed that several documents were prepared by the International Telecommunication Union and Internet Society on human-rights based approach on internet issues. Fluctuation in Nepal’s internet is caused by the fluctuation by the upstream provider like Tata, AirTel. Internet is expensive because our people have low pay capacity. He expressed worry why internet was imposed heavy tax although it is dubbed as ‘essential service.’

Why Nepal Electricity Authority cut off internet lines all of a sudden in Chitwan city? It must be raised seriously.

Mr Khadka was urged by FF that ISPs should not be misused.

Founder and Executive Director of Body and Data, Shubha Kayastha, stressed the technology, innovation and internet must not be discriminatory. Why policymakers and regulators are not aware to ensure equal rights to the people of different identities in the digital space? She shared that there is huge social censorship to the people with different identities. She blamed that law-making is too biased.

Chairperson of Nepal Internet Foundation and banker, Bikram Shrestha, said although the internet expansion is rapid, the skills and knowledge to use internet properly is very low in Nepal, which he said, could hamper exercise of citizen’s right on internet. So, internet literacy is must for all including our parents, he added.

Chairperson of Online Journalists’ Association, Shiva Satyal, expressed worry why ETA was employed to arrest and harass FoE practitioners including journalists in Nepal.

he believed. He said why the debate was tilted mostly toward negative of internet?

Internet enthusiast Shreedip Rayamajhi viewed promotion of self-regulation on internet would help us safe and able to exercise rights.

Tribhuvan University teacher on mass media, Lekhnath Pande, viewed that our data protection and privacy were fragile. Internet literacy is must for all, he added.

Human Rights official at National Human Rights Commission, Ms Kalpana Jha, said we must be aware how our policy making processes are inclusive, acceptable and participatory. It should be same in case of internet related policies, she stressed.

Chairperson of Human Rights Organization of Nepal, Mahamunishwor Acharya, said once our data are not safe, our privacy is risked. Where do our data go? We must be aware. Government is backward on IT issues, he blamed. Acharya suggested FF to organize such programmes for the lawmakers. HURON was ready to work together with FF on it, he added. 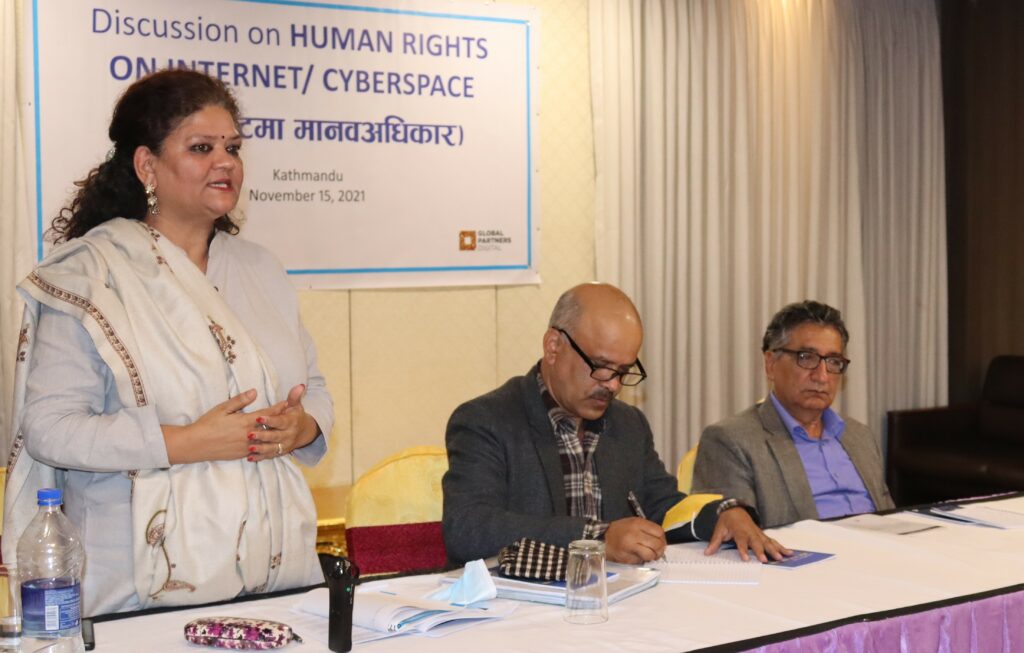 Senior journalist Ms Babita Basnet said time has come to discuss every issue on internet like FoE, privacy, data protection on internet and digital space in a segregated manner to build further understanding. Let’s prioritize right to privacy together with FoE online. She lauded the strategy document FF brought in Nepali language, saying it is really appreciative work. Translation of such important strategy on pressing issues is timely to build knowledge around internet, she believed and thanked FF.

Chairperson of Federation of Nepali Journalists, Bipul Pokhrel, said traditional crimes and the crimes after internet should be treated differently. Internet should be used to promote FoE and journalism, he viewed. Only policy and laws are not enough, states must bring programmes on digital literacy, he underscored. 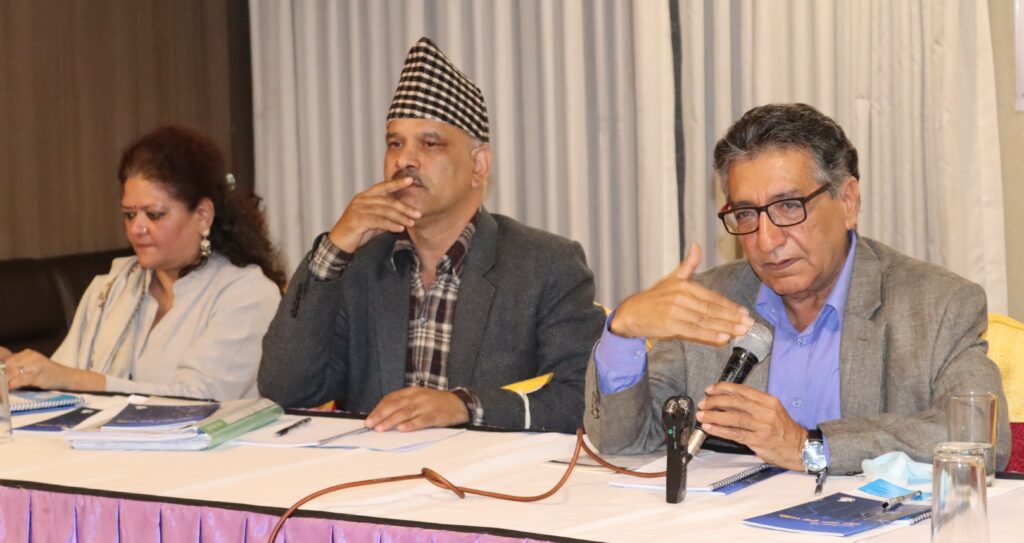 Noted IT expert in Nepal, Manohar Bhattarai, said, “Internet’s impact is vehement and unprecedented on humanity. So, this discussion is held at a right time.” He viewed that cyber security and online safety could be regarded differently. Even the ISPs should be made accountable, he said, underscoring that internet must be neutral and open. He wondered why Nepal Telecommunications Authority (NTA) was spending huge amount on content filtering. The algorithm of content filtering by NTA must be transparent, Bhattarai underlined. The generalized and vague terms in policy must be wiped out, he added.

FF Executive Chief Dahal thanked all for their precious views on the important topic.