You are at Home End Impunity Day 2020: FF seeks solidarity to end impunity for crimes against journalists

Freedom Forum organized a virtual programme on the occasion of the International Day to End Impunity for Crimes against Journalists in Kathmandu on November 27. The event gathered 33 participants ranging from the family members of the victim journalists, FoE defenders, academia, media persons and officials from human rights body and transitional justice mechanisms.

In the programme, the family members of the journalists killed during the insurgency period in Nepal appealed for cooperation from all sides-journalists, FoE defenders, transitional justice mechanism and government- for justice.

Senior journalist and FoE defender Dharmendra Jha made a presentation on the status of the journalists killed and disappeared in Nepal since 1996 till date. He shared the study report carried out by Freedom Forum that 23 journalists were killed in Nepal since 1996. The country witnessed armed insurgency from 1996 to 2006. “The perpetrators involved in crime against journalists were still walking scot free; some cases were pending in courts, some in transitional justice mechanism; and investigation is stalled for some cases,” he said, adding that justice was delayed much to the worry of families of victim journalists. 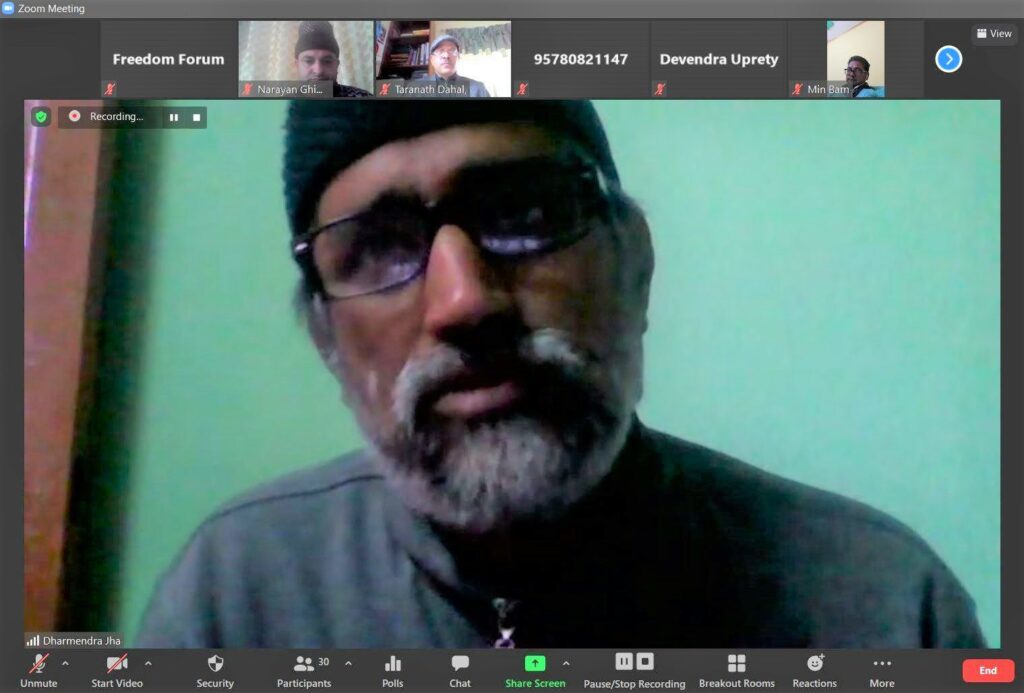 Jha further said although it has been long Nepal restored democracy, journalists are stilling facing intimidation. Although society sees crimes, the impunity relating to it is bad for good governance. “It is however positive that Nepal police arrested some murder accused in case of journalists Dekendra Thapa and Birendra Saha some months back,” he mentioned.

“It is appalling that the letters by UNESCO Director-General to the government on status of justice to the slain journalists in Nepal were not responded,” said Freedom Forum Executive Chief Taranath Dahal, arguing entrenched impunity is sheer challenge to freedom of expression and journalists right, rule of law, transparency and democracy. He informed that the International Day to End Impunity for Crimes against Journalists is observed throughout the month of November across the globe.

Journalists, who are frontline human rights defenders and informing people, face more risks. It is the Day to express solidarity to the campaign for justice to the families of the journalists killed and disappeared. FF has been continuously updating the status of the journalists killed and disappeared in Nepal. It is observing the Day since the UN announced it. In the wake of Covid-19, FF is marking the event in a virtual method. Impunity is a chronic problem in Nepal. To end the impunity, all-side stakeholders should press the Stateside continuously. 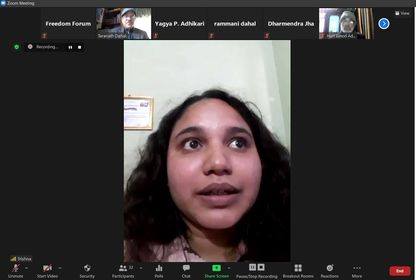 As Nepal had festivals during November 2 this year, Freedom Forum is organizing the program today (Nov 27).

On the occasion, daughter of slain journalist D Kaundinya, Trishna Acharya, said, “We had said in the last program too government needs to come up with concrete plan to address impunity on the crimes against journalists. The delayed justice has further victimized the victims. The State has failed to be guardian of the conflict victim families. Even the social security of victim journalists’ families should be considered now. We must not be politically categorized. It further victimizes us.”

“It has been more than 10 years we have been prodding the government agencies including judiciary that we’ve not got justice. We’re quite de-motivated,” said Manisha Dhital, daughter of slain journalist Devi Prasad Dhital.

Sushmita Baniya, who is the daughter of the late journalist Balram Baniya, said her father Balram met mysterious death last August. “I believe my father who did journalism for 30 years for the sake of good governance in the country was killed merely over the news he wrote. My father was pressed from various sides to justify the news he wrote in the daily. He faced death threats as well. We need cooperation from fellow journalists to get justice,” Sushmita stressed. 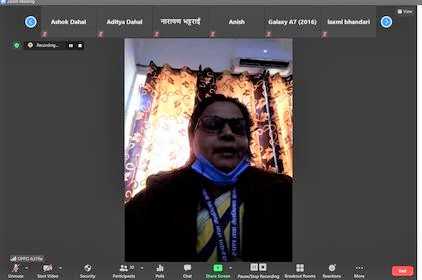 On the occasion, Member of the Truth and Reconciliation Commission, Ms Bishnu Pokhrel, shared that TRC was currently working on the complaints and their nature. “Any complaint filed by the families of the victim journalists which fall under its jurisdiction, is investigated and recommendation made to the government,” she made commitment, seeking assistance from all sides to ensure justice to the victims.

Preliminary and detailed investigations are conducted on the complaints. The investigations are done as per the mandate. There are a total of 3,787 complaints at TRC, according to her. “The Covid-19 also affected our works in the later days. However, the process of investigation is on,” Sharma said, underscoring, “It is not that the new term of TRC does not work as that of first term. We’re committed to delivering justice as per the Act and mandate.”

Director at the National Human Rights Commission, Yagya Prasad Adhikari, said the government must not show apathy to bring to book the violators of human rights. The NHRC made public the names of human rights violators over different times and made recommendation to the government. It was done in its 20 years of investigation. However, it is worrying that only 10.5 percent of recommendations are implemented. 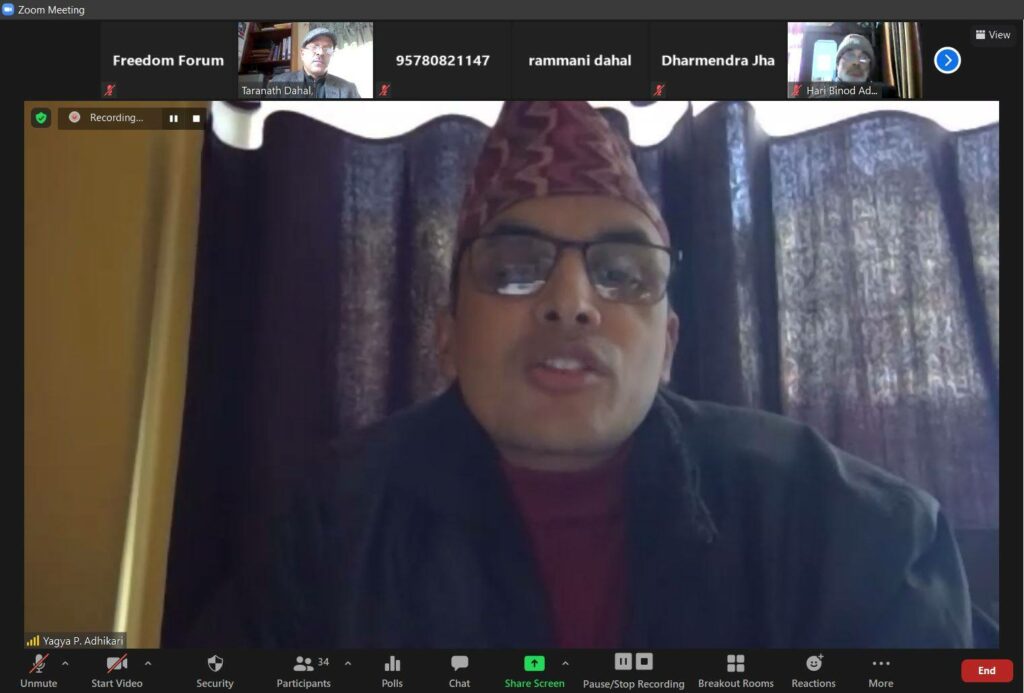 Although the Foreign Ministers make commitment in Geneva that Nepal government respects human rights, it is in practice, weak at home. So the victims of armed conflicts are still waiting for justice.  “I think the transitional justice mechanism must be more active and strong to help end impunity,” he said, adding that NHRC has been recommending the government for protection of human rights.

He expressed worry over failure of the first term of the transitional justice mechanism.

On the occasion, Vice-President of the Federation of Nepalis Journalists, Bipul Pokhrel, said it was quite worrying that impunity related to crimes against journalists was a permanent issue. “FNJ has been continuously urging the government and other stakeholders to ensure justice to the victim journalists,” he reminded.

Freedom Forum Chairman Haribinod Adhikari also expressed sadness over the failure of previous term of the transitional justice mechanism. The victim families were not ensured justice. He hoped such programme would create atmosphere to exert pressure on the concerned sides to address impunity.

Although Freedom Forum had informed about the program and invited the representatives from government like Ministry of Communications and Information Technology, Home Ministry, Office of the Prime Minister and Council of Ministers, Nepal Police, the officials failed to attend the program.