You are at Home Impunity Update: FF welcomes court verdict of life imprisonment to murderers of journo Dekendra Thapa

While others have served their jail terms, two Harilal Pun Magar and Jay Bahadur Shahi fled before completing their jail term and were rearrested on December 15, 2020 and February 6, 2021 respectively.

According to FF reports, Journalist Thapa was abducted and buried alive after 45 days of abduction by then CPN-Maoist cadres on August 10, 2004. After four years of murder, his body was discovered and final rites were observed.

To this, FF Executive Chief Taranath Dahal observed, “Though it is late, the court verdict has addressed long-entrenched impunity for crimes against journalists and provided justice to the victim families. The concerned authorities are urged to address to the other pending cases of impunity against journalists.” 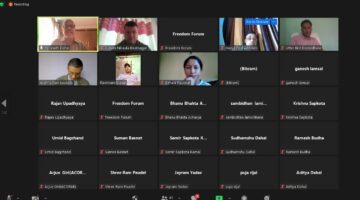