Freedom Forum organized a discussion program on -Amendment of National Statistics Bill through open data context- on September 26. The program was held as part of the project- Advocacy of the open-data perspective in the National statistics Bill- supported by The Asia Foundation. 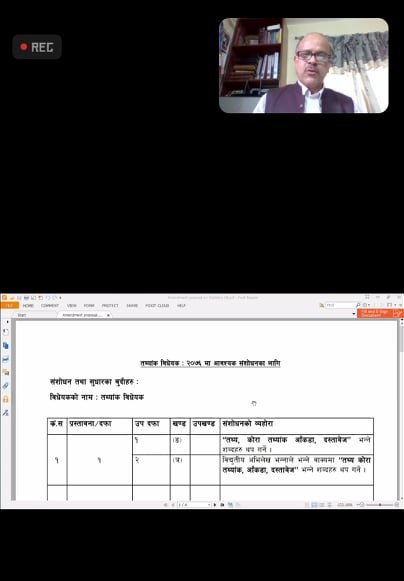 At the program, FF’s executive chief Taranath Dahal described FF’s review on the bill and the need for its amendment in context to open data principles. Data and its forms (raw data, documents, and information) should also be defined under statistics in the bill, the bill should be in line with basic principle of open data as data/ statistics should be in machine-readable format and should be reusable for free.

He drew attention of the participants on FF’s comments on seven clauses of the bill which was recently approved from the National Assembly.  The proactive disclosure of the information, free availability of electronic data, and availability of information as per Right to Information act should be included in the bill.

Adding to Dahal’s comments, Professor at Kathmandu University Dr.  Sudhamshu Dahal suggested the bill should reflect aspects of data quality management which should be applicable in all domains be it social or business. As the discussion focuses on policy level change the bill should address the integrated approach, he marked.

Another expert of Open data community Nikesh Balami thanked FF for its continuous lobby for amendment of the bill which has been important to build open data friendly bill.

Meanwhile, Daya Sagar Shrestha, chairperson at Nation Campaign for Sustainable Development expressed worry about unavailability of data at local level government offices and unawareness of the local authorities on open data principles. They are neither aware about usefulness of data in open format nor interested in updating data on the official websites which has directly affected development process as well, he stressed.

Most importantly, the local authorities should be trained and capacitated to adopt open data friendly system, he added.

To this, Executive Chief Dahal informed that the method for data collection, storage, analysis and dissemination at different level of the government is incorporated in the bill amended and approved from the National Assembly.

Manoj Giri, Secretary at Legislative Management Committee of National Assembly praised FF’s initiation to advocacy for amendment of the bill. FF’s review and comments on the bill has been very helpful for its improvement, he said.

Executive Director at Samudayik Sarathi stressed on the need of massive campaign and wider public consultation for further improvement of the bill. Such activities will help incorporate ideas from the lay man and will build public ownership as well as validate the provisions of the bill, he suggested.

Sajana Amatya from The Asia Foundation also recommended FF to strengthen its advocacy and engagement with bureaucrats at national assembly, parliamentarians and consultation with the public for further improvement of the bill.

Policy Advisor at FF and one of the reviewers of the bill, Krishna Sapkota highlighted that provisions for interoperability and metadata concept have been addressed in the bill after its approval from National Assembly which is the result of FF’s continuous advocacy.

He further said the process is continuous and FF will continue to lobby with the public as well as policy stakeholders for promotion of open data regime.